From Diablo Canyon on the central California coast to Turkey Point on the southeast tip of Florida, the United States is home to 99 nuclear power reactors at 62 nuclear plants generating roughly 20 percent of the nation’s electrical energy. But in an industry beset by disruptive technologies and intense competitive pressures, the future of nuclear energy in the U.S. is anything but certain.

In a status report published last fall, the Nuclear Energy Institute — the industry’s foremost lobbying organization — painted a grim picture, pointing to a “perfect storm” of economic, regulatory and market forces threatening to swamp nuclear operators under a tide of red ink. Renewables such as wind and solar are gaining market share while a flood of low-cost natural gas extracted from shale is driving down energy prices. At the same time, consumer demand for electricity has remained essentially flat since the recession and is expected to grow less than 1 percent a year for at least the next decade. 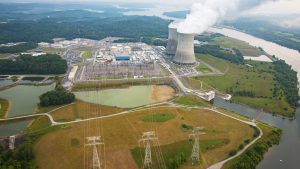 Watts Bar Unit 2 in East Tennessee, which began operating last October, is the first commercial nuclear reactor constructed in the United States in more than 20 years.

These economic pressures are taking their toll. Five nuclear plants have shut down nationwide since 2013, and 19 reactors are currently undergoing decommissioning, according to the Nuclear Regulatory Commission. More are sure to follow.

Only one new commercial reactor has come online in the United States in the past two decades: Watts Bar Unit 2 in East Tennessee, which began operating last October. The reactor’s history underscores the challenges facing the industry. The Tennessee Valley Authority began building two reactors at the site in 1973 but suspended work on Unit 2 in 1985 due to weakening demand for electricity and a host of regulatory issues. TVA resumed construction of the reactor in 2007, completing work more than four decades after the project broke ground, at a total cost of $6.4 billion.

Four new reactors are under construction in the South — two in Georgia and two in South Carolina — where the electricity market is still tightly regulated, giving nuclear operators some protection from unfettered competition. Still, reactor construction can be remarkably complex, time-consuming and costly, making new nuclear plants prohibitively expensive to build all over the country.

A 2015 study by researchers Tom Stacy and George Taylor for the Institute for Energy Research estimated that just to break even, a new reactor must charge $84.50 per megawatt-hour for electricity. That’s more than $18 per megawatt-hour above the break-even point for a new conventional natural gas plant.

Not surprisingly, the researchers found that existing nuclear reactors have a significant cost advantage in the energy market, because their construction expenses were incurred decades ago, allowing them to break even at an average of just $29.60 per megawatt-hour.

The takeaway is clear: Nuclear power can only remain a significant part of America’s energy portfolio if nuclear operators find ways to enhance the power, efficiency and life spans of their existing reactors. NC State is part of a team working on helping them do just that.

David Kropaczek opens a slide presentation on his computer, displaying a page crowded with the names and emblems of more than three dozen entities trying to save the U.S. nuclear industry, including some of the country’s top research universities, laboratories and energy companies.

At the center of the page is the logo for Oak Ridge National Laboratory, a pioneering federal research institution established in 1943 to harness the power of the atom. During World War II its sprawling campus in rural Tennessee was a leading research site for the top-secret Manhattan Project. Today, it’s the U.S. Department of Energy’s largest science and energy research lab, as well as the home of Titan, a supercomputer with 299,000 processor cores and 710 terabytes of system memory that is capable of more than 27,000 trillion calculations per second. 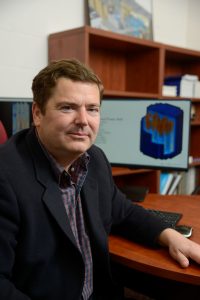 Kropaczek, Duke Energy Distinguished Professor of Nuclear Engineering at NC State, is among a multidisciplinary group of researchers putting Titan’s computing power to work to solve the biggest technical challenges facing nuclear energy. The ambitious Department of Energy program called CASL, the Consortium for Advanced Simulation of Light Water Reactors, is a 10-year, $243 million effort to tip the market back in nuclear’s favor through scientific innovation.

Kropaczek, who recently joined the program as chief scientist, says CASL is concentrating on real-world solutions that can be implemented in the industry’s existing environment. “This is a milestone-driven research-and-development effort,” he says. “We’re focusing on problems that have gone unsolved for many, many years.”

The consortium is historic in a very real sense. It’s one of just five Energy Innovation Hubs established by the Department of Energy since 2010 to apply a multidisciplinary systems approach to overcoming critical technological barriers to transformative advances in energy technology.

Other partners include Sandia National Laboratories, the University of Michigan, the Massachusetts Institute of Technology, the Tennessee Valley Authority and the Electric Power Research Institute. 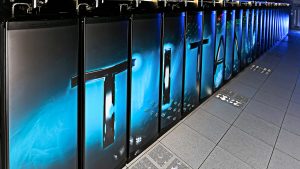 Titan supercomputer at Oak Ridge National Laboratory in Tennessee is the nation’s most powerful computer.

Fittingly, Kropaczek’s office at NC State is just two floors above the university’s PULSAR reactor in the Burlington Engineering Laboratory, a midcentury glass-and-brick structure once labeled by an Associated Press science editor as “the first temple of the atom.” As he administers the work of teams of scientists scattered around the country and organized into six technical focus areas, Kropaczek seems more like a diplomat than a priest. After all, the biggest problems facing the nuclear industry are so complex, it takes scientists with expertise in numerous fields working together to even begin looking for solutions. The vocabulary of one discipline may sound like a foreign language to scientists working in another field.

“The most surprising thing we’ve learned is that it’s possible for diverse teams to work together,” Kropaczek says, only half joking. “We’ve proved that people from different universities and different labs, some from industry, others from government and academia, can come together and do great things.”

The core of the CASL program is a sophisticated virtual nuclear reactor called VERA, short for Virtual Environment for Reactor Applications, that can accurately simulate complex reactor operations involving dozens of factors and forces — such as thermal hydraulics, fuel chemistry and material properties — all the way down to the atomic scale. It’s a game-changer for scientists and engineers seeking to understand and solve seemingly intractable problems.

Essentially, VERA operates as the world’s safest reactor, allowing researchers to push the margins of reactor performance on the computer—where a steam line break or a worn fuel rod costs nothing, harms no one and is repaired with a keystroke.

VERA employs a computational method called coupled multiphysics that allows researchers to combine models for several phenomena into a single simulation. For example, one of the nuclear industry’s biggest technical challenges is crud, the term nuclear engineers use for the particles that build up on fuel rods. “Crud can actually change the reactor’s power shape dramatically,” Kropaczek explains. “Many reactors have experienced crud-induced power shifts, and others have experienced crud-induced corrosion.”

To understand the conditions inside the reactor that cause crud to develop, CASL researchers created a 3-D model of the corrosive material. The model can run on VERA as a standalone application, or it can be coupled with programs that model the flow of water around the fuel rods and the interaction of neutrons and materials inside the reactor core. Thanks to VERA, researchers can predict how much crud will accumulate on the fuel rods under different operating conditions and how it will affect the reactor’s power level. VERA will allow researchers to test ideas that could help nuclear operators manage the buildup of crud, ultimately reducing the need for costly power reductions.

CASL researchers have been contemplating what happens to all of their innovative teamwork when the program’s federal funding runs out in two years. That’s where CASL’s educational mission comes into play, says Michael Doster, an Alumni Distinguished Undergraduate Professor of Nuclear Engineering who works down the hall from Kropaczek at NC State. 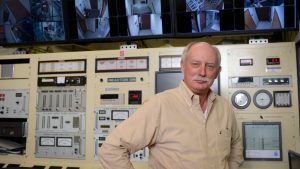 Doster, whose recent research has focused on the deployment of small modular reactors that can be manufactured at a plant for a fraction of the cost of traditional reactors, is director of CASL’s education program. “We’re trying to take the modeling and simulation technologies that we’re developing — the software and new tools we’re creating — and move them into the classroom and into training programs for industry,” he explains.

Professors and students in NC State’s Poole College of Management have also weighed in, creating a business plan for a post-CASL entity that could continue some of the program’s research and development efforts in concert with industry partners.

“Nuclear has an important role to play in a stable energy grid,” Doster says. “If we want to move to electric cars and stop burning fossil fuels, where is that electricity going to come from?”

Doster’s recent research suggests that small modular reactors may become viable options in some communities in the coming years, especially as more of America’s first generation of reactors reach the limits of their life spans. “There are people working on strategies for deploying reactors of that design,” he explains. “They will require enhanced modeling and simulation capabilities that will benefit from what is being developed in CASL now.”