A study by economists at North Carolina State University finds that most people are unwilling to rent vacation homes that have a view of offshore wind turbines – and that those who will rent expect steep rental discounts unless the turbines are more than eight miles offshore.

“We wanted to know what the impacts of wind farm installations would be on North Carolina coastal tourism, though our findings are also likely relevant for similar coastal vacation spots,” says Laura Taylor, author of a working paper on the study and director of NC State’s Center for Environmental and Resource Economic Policy.

“We found good news and bad news,” Taylor says. “There was a lot of support for wind energy, but no one was willing to pay more to see wind turbines from the beach by their vacation rental property. And if turbines are built close to shore, most people said they would choose a different vacation location where they wouldn’t have to see turbines. However, the good news is that our results also show that if turbines are built further than eight miles from shore, the visual impacts diminish substantially for many survey respondents and it is unlikely the turbines would negatively impact coastal vacation property markets.” 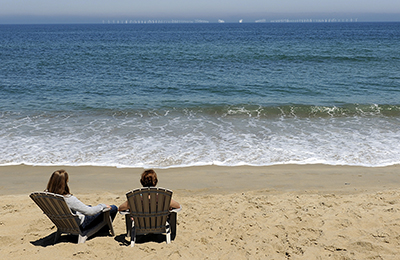 This image illustrates what 144 wind turbines would look like if located 12 miles offshore. Click to enlarge. Image courtesy of Laura Taylor.

Tourism is a major economic driver in coastal North Carolina. For example, in Dare County, home of many of North Carolina’s coastal vacation spots, tourism generated an economic impact of $1.2 billion in 2014.

To explore the economic impact of offshore wind farms, the researchers surveyed 484 people who had recently rented homes on the North Carolina coast in areas where the state has offshore leases available for wind farm development. Fifty-six percent of the study participants had rented vacation homes every year for the previous five years, and one-third of that 56 percent had rented the exact same house every year.

In the survey, study participants were asked to consider renting the same vacation house they had just rented, but with one change: the view would include wind turbines off the coast.

Participants were shown various sets of photographs. Two control photographs were of a view from the beach looking over the ocean – one taken at night, one during the day. The same photos were then altered to include up to 144 wind turbines at 5, 8, 12 or 18 miles offshore. Some participants were told they would get a discount on their rental price if wind turbines were present; some were told they would pay more; and some were told there would be no change in rental cost. Discounts went as high as 25 percent off the original rental price.

The results showed that study participants were split into three groups.

Fifty-four percent said they would not rent a vacation home if turbines were in view at all, no matter how large a discount was offered on the rental price.

The remaining 26 percent of participants made more nuanced tradeoffs. They needed rental discounts if wind farms were as far as 12 miles offshore – and the discounts they needed if turbines were closer than 12 miles were so high as to be completely unrealistic.

“If a wind farm was built 5 miles offshore and only 1,000 homes had impacted views – and had to reduce rents accordingly – we estimated the economic impact at $31 million over 20 years,” Taylor says. “The question then becomes, does that $31 million outweigh the cost of moving a wind farm further offshore?”

The researchers estimated, using available data, that moving a wind farm from 5 miles to 10 miles offshore would increase construction costs by $5 million.

“This suggests that the benefits to the rental community would outweigh the costs to the wind farm industry of moving the turbines further offshore,” Taylor says.

“The good news for North Carolina is that, at present, the state has removed all but one of the potential wind farm sites that are less than 12 miles from shore,” Taylor says. “But that could change. And our findings are relevant to other coastal regions that are family-oriented communities with many repeat visitors and have lower-density development that is mostly beach houses – these features are common all along the Atlantic seaboard.”

The working paper, “The Amenity Costs of Offshore Wind Farms: Evidence From A Choice Experiment,” is available online. The paper was co-authored by former NC State Ph.D. student Sanja Lutzeyer and Daniel Phaneuf, a former faculty member at NC State now at the University of Wisconsin-Madison. The research was supported by North Carolina’s Department of Commerce. Taylor has also written a post containing her thoughts on the research. That post is available here.